Musk was born to a Canadian mother and South African father and raised in  Pretoria, South Africa. He briefly attended the University of Pretoria before moving to Canada when he was 17 to attend Queens University.. He transferred to the University of Pennsylvania two years later, where he received dual bachelor's degrees in economics and physics. He moved to California in 1995 to begin a Ph.D. in applied physics and material sciences at Stanford University, but dropped out after 2 days to pursue a business career.

1992 - University of Pennsylvania, and graduated with an undergraduate degree in economics and stayed for a second bachelor's degree in physics.

1995 -  Musk and his brother, Kimbal, started Zip2, a web software company which developed and marketed an Internet city guide for the newspaper publishing industry.

2000 -  X.com merged with Confinity, which had a money-transfer service called PayPal and became the CEO and company's largest shareholder by owning 11.7% of shares.

2002 – February  the group returned to Russia with others to  look for three ICBMs.  The group were offered one rocket for US$8 million; however, this was seen by Musk as too expensive; Musk realized that he could start a company that could build the affordable rockets he needed.

2004 Musk and his wife had 2 sons, twins, through in vitro fertilization.

2006 -  Musk and his wife had other 3 sons, triplets, through in vitro fertilization.

Musk provided the initial concept and financial capital for SolarCity, which was then co-founded by his cousins Lyndon and Peter Rive.  2006, SpaceX got various contracts from NASA to transport cargo and astronauts to the International Space Station.

2011 – July  the Musk Foundation donated US$250,000 towards a solar power project in Sōma, Japan, a city that had been recently devastated by a tsunami.

2013, SolarCity was the second largest provider of solar power systems in the United States.

2014, Musk announced that Tesla would allow its technology patents to be used by anyone in good faith in a bid to entice automobile manufacturers to speed up development of electric cars.

2015 - November Musk appeared in an episode of The Big Bang Theory, playing himself, volunteering at a soup kitchen with Wolowitz.

2016 – Divorces Riley, Begins American actress Amber Heard in 2016 but the two split up after one year due to their conflicting schedules.

2017  - May Hyperloop One, a company participating in Hyperloop competition, had announced that it had done its first successful test run on its DevLoop track in Nevada on July 13, 2017. It lasted 5.3 seconds, reaching a top speed of 70 mph.

2018 – May  Musk and Canadian musician Grimes revealed that they had begun dating.

2019 – January, Musk traveled to China for the groundbreaking of Tesla's Shanghai Gigafactory, which is the company's first large-scale plant outside the U.S. 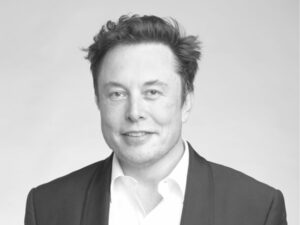