1992: Scores his first acting role in Australian film Clowning Around.

1997: Lands a part in Australian film Blackrock and appears on television soap Home and Away. In TV series Roar.

1999: Stars in Two Hands with Bryan Brown and Hollywood teen film 10 Things I Hate About You.

2004: Begins dating Michelle Williams, whom he met on the set of Brokeback Mountain.

2006: Nominated for a best actor Academy Award for Brokeback Mountain, -
Ledger Returns to Australia to star in Candy with Abbie Cornish and Geoffrey Rush.

2007: One of six actors to portray Bob Dylan in I'm Not There. He films The Dark Knight, in which he plays the Joker. * September Ledger splits with actress partner Michelle Williams.

2008: Jan 22, Ledger found dead in Manhattan apartment aged 28 in what authorities say is a drug-related death. 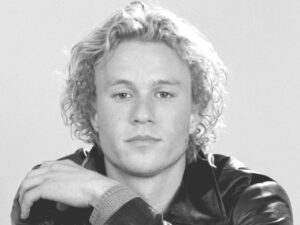