Feb 28, 1945. At 23 and during WWII he was sent to Lubang Island in the Philippines with group of other soldiers. Within landing all but 3 other soldiers had either died or surrendered. As he was the highest ranking of the other 3 (lieutenant) he order the men to take to the hills.

They continued the holdout continuing with guerrilla activities engaging in several shootouts with police. In Oct 1945 they saw leaflets announcing Japan had surrendered on Aug 15, 1945 however they distrusted the leaflet thinking it was propaganda.

1950: One of the four men surrendered to Filipino forces

1952: Letters & pictures from home were air dropped urging them to surrender but they concluded it was a trick as they kept being fired upon.

1954: One of the men was shot in leg during shootout and killed by a local search party

1972: Another man was killed by local police. He was now alone

1974: Japanese Student Norio Suzuki found him and told him the was war over. He still refused to surrender saying he was waiting for his superior offer to tell him. Suzuki returned to Japan with pictures of them together as proof. The Japanese government located Onodas commanding officer who flew to Lubang on March 9, 1974 to officially relieve him of his duties and bring him home.

1975: He had a hard time adjusting especially with so much publicity. Wrote an autobiography called No Surrender My Thirty Year War.

Spent 3 months each year in Brazil till death

2010: Awarded Citizen of Mato Grosso do Sul in Brazil 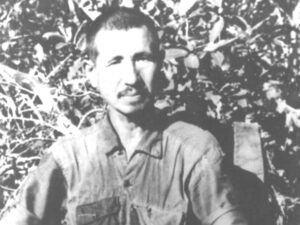