Between 1972 and 1977 family moved around as missionaries. Lived in Texas, Mexico, Puerto Rico and Venezuela. Another brother Joaquin and Sister Liberty and Summer were born. As a young child, Phoenix learned to play guitar and sing. Phoenix and Rain performed on the streets in Caracas, Venezuela, to earn money and pass out literature on their religious beliefs.

1978: Parents became disillusioned with their religious group returned to Floria. Phoenix and some of the other children performed in talent shows and started to attract attention for their musical and acting abilities.

1979: Family name was changed to Phoenix chosen for it’s mythical connotations of risig from the ashes. Moved to California to try to make in the entertainment industry. His mother found an agent to represent all of the children and found a job working as a secretary at NBC. At first, Phoenix landed a few commercials. He then got a role as the youngest brother on the

1980: He got some jobs in commercials

1982: Landed role in television series Seven Brides for Seven Brothers. Only one season, he continued to work, making a number of guest spots on other shows, such as Hotel and Family Ties. He also had a notable role in the 1985 television movie Surviving.

1986: Stars in the Rob Reiner film, Stand By Me, Stars in The Mosquito Coast with Harrison Ford and Helen Mirren.

1988: Stars in Little Nikita. & Stars in Running on Empty with Judd Hirsch, Christine Lahti, and Martha Plimpton. Phoenix is nominated for an Academy Award for Best Supporting Actor for his role.

1989: Stars in Indiana Jones and the Last Crusade with Harrison Ford and Sean Connery.

1990: Stars in I Love You to Death with Kevin Kline and Tracey Ullman.

1992: Stars in Sneakers with Robert Redford and Dan Aykroyd.

Oct. 31, 1993 River dies of a drug overdose of heroin and cocaine outside Johnny Depp’s Viper Room club in Hollywood. His brother Joaquin makes the 911 call. 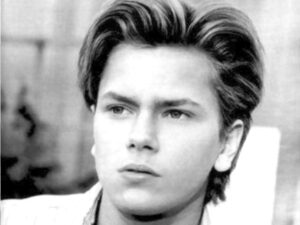