In December, the group’s single “I Want You Back” hits No. 1 on the Billboard Top 40 Chart.

1974: Introduces a dance step called the robot on “Soul Train.” The step sweeps the country.

1978: Played “The Scarecrow” in the movie musical “The Wiz,” alongside Diana Ross, Richard Pryor and Nipsey Russell.

1979: Jackson’s “Off the Wall” solo album catapults him to superstar status.

1982: “Thriller” is released, eventually selling more than 100 million copies. It makes Jackson the biggest pop music star of the decade. The record becomes one of the best-selling albums of all time.

“Motown 25: Yesterday, Today, Forever,” airs on NBC. After a memorable performance by “The Jacksons,” Michael wows the crowd with a rendition of “Billie Jean,” which included the jaw-dropping moonwalk.

1984: Jackson’s hair catches on fire during filming of a Pepsi commercial.

1987: News reports say Jackson tries to buy the skeleton of the “Elephant Man.” The album “Bad” is released and sells more than 8 million copies.

1988: Michael Jackson donates $125,000 from a concert at the Palace of Auburn Hills, Mich., and some personal memorabilia to start off a fundraising drive to preserve and improve the Motown Historical Museum. Releases “Moonwalk,” an autobiography.

1993: In his first TV interview in 14 years, Jackson tells Oprah Winfrey that the change in his skin complexion is from a disorder called vitiligo.

A lawsuit claims that Jackson seduced and abused a 13-year-old boy.

1994: Settles the lawsuit with substantial payment to the plaintiff. Los Angeles and Santa Barbara district attorneys don’t file child molestation charges against him.

1997: Rowe gives birth to son Prince Michael. - The Jackson 5 are inducted into the Rock and Roll Hall of Fame.

2001: The “Invincible” album is released with a respectable 2.1 million copies sold, but only two minor hits.

2003: Faces charges of child molestation. Posts $3 million in bail and throws up the “V” sign, while standing on a black Suburban, before leaving the courthouse in Santa Maria, Calif.

2004: Jackson pleads not guilty to child molestation charges in January.

2005: In June, Jackson was acquitted of child molestation charges 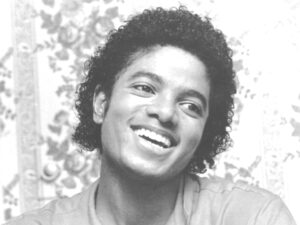