1970: Began competing in decathlons and sporting meets– decided to devote his life to competing and sports

1972: Married Chrystie Cronover who he met in college. She supported them as a flight attendant for the next four years as he trained.

1975: Won the Pan-American Games decathlon. These wins made him a sure member of the U.S. Olympic team for 1976

1976:  Summer Olympics in Montreal. Where he set world records in decathlons. Gained fame as "an all-American hero.”

1977: Promoted as Worlds greatest athletic and was picture on box of Wheaties Cereal. Jenner established a career in television, film, writing, auto racing, business, and as a Playgirl cover model. After the Olympics he decided to never compete again.

1978: Bought a Bonanza airplane and learned to fly – Had first son Burt in Sept

1980: First daughter born June 1980. Inducted into the National Track and Field Hall of Fame – in an interview with People magazine said I was drifting. I had worked really hard and didn't have much to show for it." He also told a reporter on the Longevity Network Web site that constantly being in the public eye was making him nervous. "I found myself thrown into a glass fish-bowl as a celebrity and an American hero.

1986: Inducted into the Olympic Hall of Fame in 1986. Separated from Linda and divorced shortly after.

1990: met Kris Kardashian, on a blind date and five months later were married. Each has 4 children from previous marriage.

2007: Appeared on Reality tv Keeping up with the Kardashians with her kids

2015: Publicly  came out as a trans woman. Was involved in fatal car crash where Jenner was at fault. 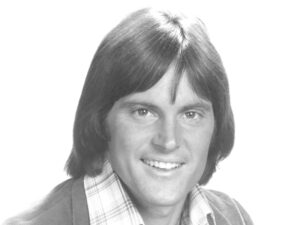