New Zealand politician who is serving as the 40th prime minister of New Zealand and leader of the Labour Party since 2017. First elected to the House of Representatives as a list MP in 2008, she has been the member of Parliament for Mount Albert since March 2017. In September 2020, she was re-elected as Prime Minister of New Zealand.  Raised in Hastings and brought up in the Mormon religion.

2005: Overseas to Britain worked for 2/12 hears in the cabinet office of British Prime Minister Tony Blair. Serves as associate director for Better Regulation Executive.  Ardern left the church in because, she said, it conflicted with her personal views, in particular her support for gay rights.

2007: Elected President of the International Union of Socialist Youth (IUSY), a position that took her to destinations such as Algeria, China, India, Israel, Jordan, and Lebanon

2008:   Chosen as Labour’s candidate for MP of the Waikato district, a seat that historically had been beyond the party’s reach and that She became the youngest member of the House of Representatives

2011:  Ran for a seat representing Auckland Central. She lost but still returned to parliament as a well-placed list candidate.  She won high profile assignment as Social Development spokesperson. In

2014: Ran again for the Auckland Central seat, this time losing by only 600 votes. Nonetheless, ensconced at the number five position on Labour’s list, Ardern easily returned to parliament. Labour leader Andrew Little expanded her portfolio to include positions as spokesperson for Arts, Culture, and Heritage, Children, Justice, and Small Business.

2017: March 1, Ardern was unanimously elected as deputy leader of the Labour. Oct 26, sworn in as Prime Minister. She became the world's youngest female head of government at age 37

2018: June 21, Becomes the world's second elected head of government to give birth while in office

2019: March Led the country through the aftermath of the Christchurch mosque shootings. Rapidly introducing strict gun laws. Becomes engaged to be married to Gayford. One of 15 women to appear on cover of Set British Vogue. Forbes placed her 38 among the 100 most powerful women in the world.  Time Magazine short listed for person of the Year.

2020: Directed the Country’s response to Covid 19 pandemic.  Lead Labour Party to Victory in the 2020 General elections, gaining ma majority of the seats in Parliament.  Listed by Prospect as 2nd greatest thinker for the Covid 19 era 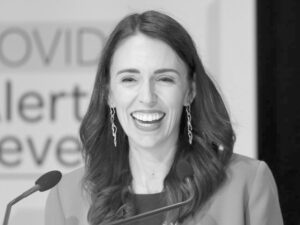